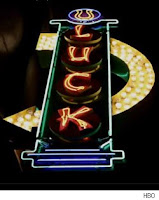 A good article from one of my favourite sources, the LA Times – quality writing and information.

Then a new HBO script, set in the world of horse racing and penned by David Milch (“Deadwood,” “NYPD Blue”), landed on Mann’s desk. “I really didn’t want to get back into television, but the script was just so damn good,” Mann said of the series “Luck,” which stars Dustin Hoffman and will air on HBO next year. “It was one of the best things anyone has ever given me to direct.”