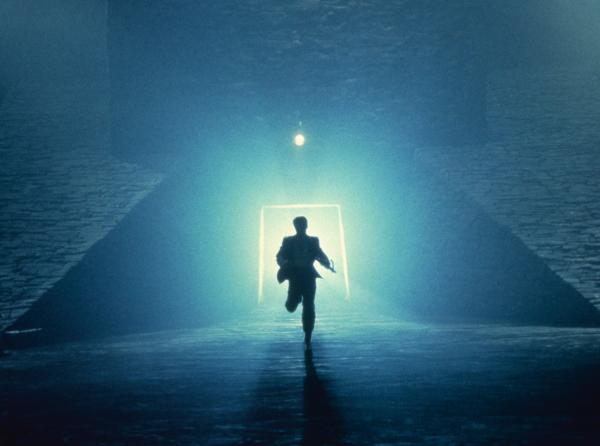 Here is good interview regarding the process behind Michael Mann directing The Keep. Who would have known that the Romanian village was filmed in Wales! I was also surprised when at the end of the interview he answered these questions in the following way:

What other films or filmmakers have impressed you or influenced you?
You’re influenced by who you like. I like Kubrick, I like Resnais immensely. I like Tarkovsky, although there’s very little in Tarkovsky I’d want to do myself. In fact I fell asleep through half of So­laris, but I still love it. And Stalker. He has a Russian, suffering nerve of pace that it’s hard to relate to, but you can’t help being impressed and moved by what you see.

Do you want to produce films?
Yes, because there are more pictures I would like to see made than I can make or want to make. A case in point is a screenplay I wrote called Heat, which I love. As a writer, I really want to see this picture made. But as a director I don’t want to touch it.

Mann then goes on to answer other detailed questions about the film, and rather interestingly about the notion of evil – something that is a vein throughout his movies – this constant counteraction of both good and bad in life:

But in this fairy tale we find the Nazi Wehrmacht – men dressed in totemic black uniforms with swastikas – things we can recognize and which set up a response.

Actually only about one-fifth of the film is involved with the Wehrmacht and the character of the Captain played by Jurgen Prochnow. The film revolves around a character called Glaeken Tris­megistus, who wakes up after a deep sleep in a transient, merchant-marine setting some place in Greece in 1941. The movie revolves around him and his conflict, which seems to be fated, with a character called Roderick Molasar. The end of the conflict seems to fate him toward destruction. He may destroy Molasar or Molasar may destroy him, but in either case Glaeken Trismegistus must go to the keep.

And in the course of coming to the keep to confront Molasar, he has a ro mance with Eva, whose father is a Medi aeval historian named Dr. Cuza, very quick, very smart. At a moment in his tory when he is powerless – a Socialist Jew in Fascist Romania – Cuza is of fered the potential to ally himself with immense power. For him it’s a deliver ance. And as a bonus he also gets rejuve nated. So he’s seduced into attaching himself to this power in the keep.

And Molasar comes to life by taking the power, the souls, of the Wehrmacht Nazis.

What happens is that after the second time you’ve seen him, Molasar changes. And he seems to change after people are killed. After he kills things. It’s almost as if he accrues to himself their matter. Not their souls; he doesn’t suck their blood. It’s a thing unexplained, his transforma­tion is seen visually. He evolves through three different stages in the movie. He gets more and more complete. He starts as a cloud of imploding particles, then he evolves a nervous system, then he evolves a skeleton and musculature, and at the third state he’s complete. And then it’s a bit ironic when he’s complete, because there’s a great resemblance to Glaeken Trismegistus.

Is he evil personified?

No. Well, yes he is. Yes, Evil Personi fied. But what is evil?

Yes, but think about that. Satan in Paradise Lost is the most exciting charac­ter in the book. He’s rebellious, he’s independent, he doesn’t like authority. If you think about it, Satan could almost be played by John Wayne. I mean the Reaganire, independent, individualist spirit. It’s all bullshit, but that’s the cul­tural myth that the appeal taps into.

Is Glaeken Trismegistus the alter ego of Molasar? Is he the good side?

No, he’s not. I tried to find a more surreal logic to the characters; so that there’s nothing Satanic about Molasar. He’s just sheer power, and the appeal of power, and the worship of power, a be lief in power, a seduction of power. And Molasar is very, very deceptive. When we first meet him, we too believe that he is absolute salvation. And it’s all a con. Now when Glaeken shows up, the first thing he does is seduce Eva Cuza. So my intent in designing those characters was to make then not black-and-white. I put in things that are not normally consid ered to be good into Glaeken and qualities that are not evil into Molasar.