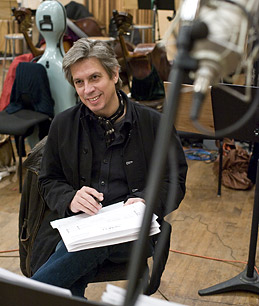 Michael Mann appears to makes his music composers work as hard as his actors in getting the exact nuance he is looking for from his scenes. Elliot Goldenthal who scored Public Enemies also worked with Michael Mann on ‘Heat’, so he knows what he is involved in. The final result is of the highest quality, though to some doesn’t match the impact of previous scores. For Mann, music has always been of equal importance to every other element in a film, and not there just as lip gloss. Music in a Mann film is often a loaded emotional message sent straight into our being that often resonates so strongly that we may even have a sense of what the character is truly feeling at that moment.

Here is a Wall Street interview with Elliot Goldenthal on working with Michael Mann on the Public Enemies score. A snippet is below, and you can click here to go to the article.

You’ve worked with Michael Mann on “Heat” and now on “Public Enemies.” I sense music is important to his films. True? How is he to work with?

He doesn’t like too many twists and turns in the music’s structure. He really responds to things that evolve very, very slowly. He wants music that the images, the edits, the dialogue can float above without it corresponding too much. With Michael, you have to be prepared to make a lot of changes. He changes his mind. He watches the movie everyday in total and makes adjustments so you have to know the job is making adjustments along the way as well.

What’s your reaction to your music when you go to a movie theater and see a film you’ve scored?

It never feels finished. That’s the thing. My personal view of my work is that everything feels abandoned.

One of the more moving pieces on the Public Enemies soundtrack is JD Dies (in the clip below).

Overall, I don’t think Goldenthal defines Public Enemies in the way that say Moby or Lisa Gerrard have in the Mann movies they have been involved in. I find it surprising that Mann hasn’t been tempted to do a collaboration with Hans Zimmer. Who would like to see that happen?!

Compare JD Dies with Chevaliers de Sangreal, which is taylored for Cathedral like grandeur. Breathtaking scoring. Hans Zimmer is a musical genius.