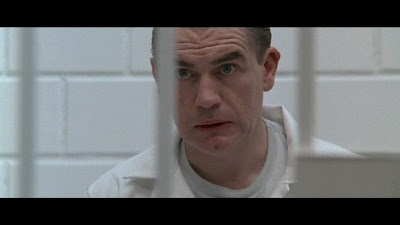 Celebrating the release of Michael Mann’s Manhunter on BluRay, there have been numerous articles written on this highly regarded cult classic. What appealed to me about this article is that it is a very recent interview with Brian Cox who played Lector, providing additional insight for those either new or familiar with the film. He comments about the music that back then had an 80’s sound that now dates the film, which could have been avoided. In a sense I think he is right, but on another level, I actually think the music still works if creating the correct mindset and context to receive it. It is powerful stuff. Overall, Cox is very positive about the film.

Here is a quote from the article that reveals something unique about Mann’s approach in Manhunter:

I think it’s interesting, though, that Mann trimmed out some of the more excessive parts of the novel, and made a much more simmering film.

He wanted to imply more, and I think he succeeded in implying evil rather than showing it. I think the opening sequence, when we go through the house while the killing’s taking place – he did it. All the videos of the families. You know their fates, but he doesn’t dwell on any of it.

It’s way, way ahead of its time. I mean, CSI and all those programmes have all virtually ripped that off, in an amazing, successful way. The chemical aspect of criminality. That whole scientific thing.

Michael [Mann] was all about the unsaid rather than the said, and [William Petersen], who every time I see the film, I think his performance gets better and better, because it’s so wrought and tight.

The full article can be read here