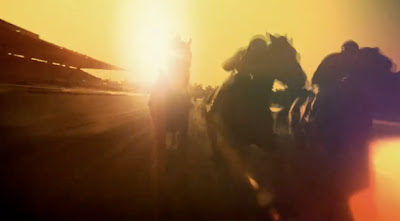 It’s a curious time following Michael Mann. We have a Luck trailer, but scant mention of the series anywhere. Only what the producers want us to know. This is well locked down, suggesting locations are not very public? Anyone know of any location shooting on Luck? There was a good article recently that gave inside information on some of the tensions between Michael Mann and David Milch. It details some inside arrangements, with Mann taking authority on the filmmaking process and Milch on the writing. Seems an obvious division of responsibilities, though one understands the unease when each has their own intense creative leanings in expressing themselves. Their respective approaches to the creative process must be at deep odds at times, with one scene pandering to Milch’s version of the world, and another reflecting Mann’s. Read about it here. For those who have lived on planet Mars for the last year, you can read about Luck as news about it broke out last year here. Luck is now more likely to air in early 2012, but could possibly be released late this year. I believe they are shooting 9 episodes (10 were originally planned, but Milch’s writing is allegedly slowing the process), with the 9th in production still. With episodes already in the editing suite, a Fall release doesn’t seem unrealistic. Since Mann is in the editing suite on Luck it isn’t inconceivable that Mann has been totally pre-occupied in perfecting Luck, and not committing to any of these movie projects just yet.

Mann is attached to multiple projects,  and just when you think he has decided a project the rumor switches to another. Big Tuna was touted as a gangster Mann movie on the back of Public Enemies. We then thought it might be Robert Capa, with actors attached to the project and widely publicised as Mann’s next directorial movie. We then hear it is Agincourt, as I recently posted. And sandwiched between them is “Gold“with D’Caprio invited to join the cast. We will have to see how Mann prioritizes these projects – which ones he directs, or produces under his Forward Pass company.

Michael Mann is notoriously indecisive about which movie projects he takes on. He admits it himself. So it may just be that even he doesn’t know yet what he will finally direct – but that is unlikely. The good news is, that if he directs Agincourt we can expect his visit to Europe! A rare chance then for us Europeans to maybe catch a glimpse of him shooting here? If anyone gets any news on this front then please let me know! Would be a dream come true to see him at work, as peculiar that may seem to his beleaguered regular crew that have to work under his relentless pace and perfection – no glamour under the hood!

Material still pops up on the internet about Michael Mann. There are many articles, but most just repeating better articles already posted in this blog’s archives. Here and there are interesting quotes and anecdotes. Here is a surprising one from a location scout on Collateral (link here):

Which leads Sandy to recall their own fear on a late-night location-scouting trip with director Michael Mann for Collateral. In a rough part of downtown Los Angeles, the group found themselves caught between rival gang members at opposite ends of a bridge.

Luckily, Mann had brought a friend of his whom Sandy describes as ‘gang-savvy,’ who broke the stand-off. The thugs ‘parted, flashed handguns, and we were able to walk through,’ David says, with a shiver. ‘But everyone – Michael Mann! – could have been killed.’

Thanks to all who drop in what they find on the net, or can contribute to this blog. I can’t always add it here but I appreciate the communication.  You can always visit my sister site, the social version, which is www.michaelmann.ning.com.

Finally a question, to test those who actually read this far into one of my posts! We all know Mann’s movies have wonderful layers. A question then: Who has noticed a particular colour that is a theme in Collateral, and is especially abstractly shown repeatedly in the very opening scenes in the form of carious objects? Its a strange one, but I think its fantastic. Surely not a coincidence? Or am I going mad? Tell me the colour and some of the objects, smile! Add it to Disqus below.

As ever, I will be keeping a watch out on Mann’s activities and let you know what I find. Stay in touch.