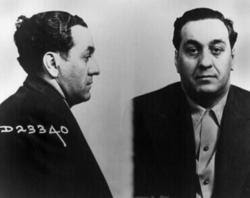 It has been announced that Michael Mann’s next movie will be “Big Tuna”, according to Variety magazine.

It is a biopic of Chicago mob boss Tony Accardo and Sam Giancana.  Looks as though this may be a more deeply refined version of Public Enemies. The police photo of Accardo is reminsicent of the ones we became familiar with in the form of dillinger. Yet Accardo’s face looks more thoughtful and reflective, than the empty, though flamboyant arrogance of Dillinger.
The screenplay will be written by Sheldon Turner and financed by Mann himself. Sheldon alone is reported to be charging him a seven figure sum, so it has to work for Mann. It would appear that Michael Mann could not find a studio to get behind the project so is going alone. Hardly a surprise, since a Chicago mob movie is going to have to be very special to attract the audiences required to satisfy nervous studios.
So the speculation seems to be over. “Big Tuna” it is… slightly disappointed at this choice as I think he is good at studying modern relationships, but I will take it as it comes – whichever way it swings, it is afterall a Michael Mann movie, and that is something to look forward too.  We also have “Luck” to come as a bonus.