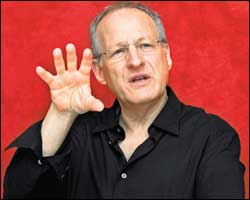 On our feedback page Hosea kindly left a link to a brilliant bang up to date interview with Michael Mann courtesy of the Financial Times. They prefer not to have their articles copied, so you will find the link here and below. But I will take a snippet which shows his remarkable interest in the 15th-century battle of Agincourt between England and France. The article also covers Mann’s interest in a Robert Capa biopic as well as a Chicago mafia story featuring Tony Accardo. Also covered is his exciting current TV project, ‘Luck’.

In terms of character study, which I think Mann is exceptional at, I would hope he goes down the Robert Capa route. As I commented to Hosea on the site feedback page, I think Michael Mann has a personal homage he may want to pay to this historic photographer. Capa set up the world renowned Magnum group with Henri Cartier-Bresson. With a documentary history, Mann will have a deep connection with Magnum photographers. Indeed, I see in Mann’s visuals stylistic nods to Cartier-Bresson, not only in the intuitive use of lines and composition, but also that characteristic over the shoulder intimacy in portraits. Of course, I may be wrong, but in my own creative photography, Cartier-Bresson’s work has been an incredible education. ‘The Decisive Moment’ defined what Bresson stood for and in a sense, I feel Mann similarly looks for these moments of “truth” in his actors and the final film. It is those moments that make Mann’s films so rich. Robert Capa had a similar ability to capture decisive moments. So visually and in character, Mann could have a fascinating journey with the Robert Capa screenplay. Mann must be eager, because the Capa biography the screenplay will be based on is not even due to be published until summer 2011.

Click here to go to the article.
A snippet is below:

…Mann also has his eye on an epic tale set in medieval Europe, about the build-up to the 15th-century battle of Agincourt between England and France. The inspiration for the film came in Paris when Mann went to visit La Sainte-Chapelle, a gothic chapel, on the advice of his friend Richard Rogers, the architect.

“We went to see it and it blew me away. From that, it becomes: ‘Can I locate myself, an audience, in a medieval perspective?’”