By Paul on January 6, 2010 in Analysis, Public Enemies 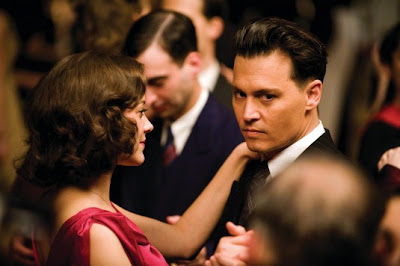 I have been away a while due to heavy work and other commitments – the usual juggling of life! Yet my passion for Michael Mann films does not wane. Some folk may be wondering where my review is of Public Enemies. I did of course see it at the movie theatre, and I do of course have an opinion on it. Yet with Mann movies, as I have said before, they seem to get better with age and repeated viewings. I am not entirely sure why this is. I think it is because each frame in a Mann shot is so packed with “essence” that it is impossible to take it in a single viewing. The Public Enemies DVD (two disc edition of course) was on my Christmas list and I was thrilled to get it from my lovely sister. Whilst Mann films are undoubtedly made for the big screen, there is also something very intimate about watching a Mann film on your own TV, in your own lounge, lights dimmed or better off, at the right viewing distance and, importantly, alone. Only then can you immerse yourself not only into Mann’s world, but into your own, as you allow your emotions to manifest, even overflow. It is a response not only to the characters you are watching, but there is this deep level reflection into your own self.

After several viewings of the DVD I will come back to write my thoughts.

One blogger helped crystallize how I perceive some of Mann’s recent movies (Public Enemies and Miami Vice), referring to the stripping down of character backgrounds. The following is an extract by Khoi Vinh from www.subtraction.com:

“Public Enemies,” continues Mann’s ongoing exploration of a stark, almost ascetic kind of narrative sensibility. With a nearly impudent disregard for common storytelling conventions, the director has in recent years taken to gutting from his works anything and everything that might be superfluous to the forward momentum of his core narratives. He affords his characters practically no backstory or prehistory, his plots are reduced to the threadbare, and subplots are often extracted altogether. Including “Public Enemies,” his past three movies are so elemental and succinct (not necessarily in running time, but in scope) that they’re just as much like episodes within a larger series of events as wholly contained feature films of their own.

What’s left out from these movies is as important and beautiful as what’s included. They’re exercises in doing as much as possible with as little as possible, implying whole swaths of narrative information by allowing the audience to extrapolate events, details, backstories and subplots from only the barest hints of their presence. In fact, what Mann is doing here (and why I am so obviously drawn to this sensibility) is designing these stories — not just their presentation but more fundamentally their construction, too — and doing so in a way that evokes many of the very same things that thrill me about design.

Mann employs an architectural approach that establishes a plot framework but declines to fill every nook and cranny. He uses very few elements to suggest many more, and in so doing constructs a kind of environment that the audience experiences rather than a narrative account that the audience observes. This is very much minimalism and experience design at work; it just happens to star Johnny Depp, is all.